Book Signing and Jacob's Getting Attacked!!!

My next book signing is scheduled for this weekend in Orem, UT. Yay! :-) Here are the details:

And right now, Jacob, my main character, is getting attacked by THIS (click on it for larger, better detail): 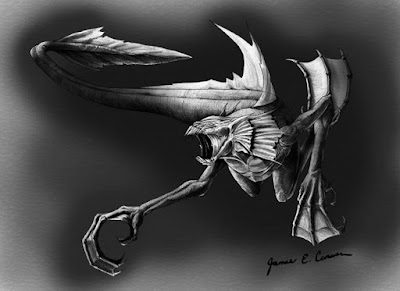 This illustration by James Curwen is my favorite by far (posted with permission).
Many of you will recognize it as an Eetu fish--the creatures Jacob and his friends encountered in The Key of Kilenya. My current writing project is August Fortress, Kilenya Series Book Three, and I'm half-way through writing Jacob's next encounter with one! Creeeeeeepy!

Back in The Key of Kilenya, when Jacob and his friends first "ran into" these fish, he and Akeno asked Aloren to tell them what they'd just seen. Here's a bit of that discussion (found on pages 110-111 of The Key of Kilenya):


“Eetu fish are really dangerous. Their fins can act like feet, giving them the ability to move quickly regardless of whether they’re on land or in water. They get to be huge—sometimes up to ten feet long. They have razor-sharp teeth that triple line their mouths, and are able to make a full-grown man disappear in a matter of seconds.”
Jacob raised his eyebrows. These fish sounded like Piranhas on steroids.
“This isn’t the only reason why they’re so dangerous, though. If a drop of the water from their territory hits you, they will hunt you down until they’ve eaten or destroyed you. They’re able to sense where that water went, regardless of whether it has evaporated or not. They know when someone has come in contact with it—even just one drop.
“Your only defense when you get wet is to hope you’re able to outrun them. They only last above water for an hour or so, but most people make the mistake of thinking they’ll die or retreat after that. This isn’t true. An Eetu fish can replenish itself with any water source big enough to cover its gills. Once it’s replenished, it continues the hunt. On average, it takes the Eetu fish around twenty-four hours to lose the scent of that bit of water.”
“Is it possible to kill one?” Akeno said.
“Yes, but it’s difficult. No average man or woman has been able to defeat them, mostly because Eetus are fast and intelligent. The only safe bet is to outrun it, if that’s even possible.”
So, there you go. I'd probably die from fear if I ever saw one of these in real life--knowing what it was capable of. :-)
Posted by Andrea at 8:18 AM