Samara: A Kilenya Romance Has Been Published!

This is the official announcement. My novella, Samara: A Kilenya Romance, has been released! I'm sooooo excited!

When Samara Oldroyd meets the most amazing guy ever, she's frustrated their conversation is cut short. Her wishes that they'll run into each other again come true when she meets her sister's new boyfriend. It's him! Eeek!
Inspired by the film Dan in Real Life, this novella will tickle you pink as Samara tries—in vain—to undo her crush. 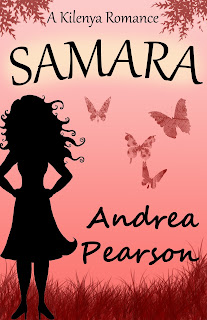 (This book won't be available in paperback/hardback format.)

Here's what people are saying so far:

"There were a couple of rough spots, but over all, I absolutely loved this story. It was short (One-fourth the size of The Key of Kilenya), but I knew that ahead of time, and it didn't really bother me. I can't wait to read more Kilenya Romances!" - Jessie

"I loved how the author knew her subjects...the nuances of each age, the subject of music and guitars. I felt like she knew the information and didn't just write a story without research or first hand knowledge. I have a feeling more people will be knowing who Andrea Pearson is in the future!" - Kim

Sneak Peak at the Cover for Samara!

Yay for new books! I'm so excited for people to read this one. :-)

Samara: A Kilenya Romance is nearly ready for publication! Woohoo!! It's about this seriously talented chick named Tracy. Ha ha. Kidding. :-) Her name is Samara, and she meets this amazing guy, gets a huge crush on him, then finds out later he's her sister's new boyfriend. She swears to herself she's going to forget him and move on . . . but she's not very successful. Inspired by the film Dan in Real Life, embarrassing, awkward, and hilarious situations abound in this novella as she tries to figure out what to do!

Now for the part I've been waiting for (you too! :-))! The unveiling of the cover! 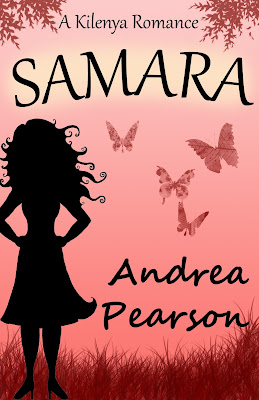 "I loved how the author knew her subjects...the nuances of each age, the subject of music and guitars. I felt like she knew the information and didn't just write a story without research or first hand knowledge. I have a feeling more people will be knowing who Andrea Pearson is in the future!" - Kim
Posted by Andrea at 5:49 PM 2 comments:

Book to Check Out: Shifting

From a good friend, to help a fellow author, Bethany Wiggins. Due to health issues, Bethany has been unable to promote her book a whole lot. Personally, I think it sounds good. :-) 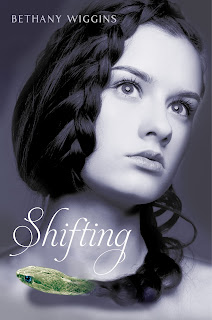 After bouncing from foster home to foster home, Magdalene Mae is transferred  to what should be her last foster home in the tiny town of Silver City, New Mexico. Now that she's eighteen and has only a year left in high school, she's determined to stay out of trouble and just be normal. Agreeing to go to the prom with Bridger O'Connell is a good first step. Fitting in has never been her strong suit, but it's not for the reasons most people would expect-it all has to do with the deep secret that she is a shape shifter. But even in her new home danger lurks, waiting in the shadows to pounce. They are the Skinwalkers of Navajo legend, who have traded their souls to become the animal whose skin they wear-and Maggie is their next target.
Full of romance, mysticism, and intrigue, this dark take on Navajo legend will haunt readers to the final page.
About the Author:
Bethany Wiggins has always been an avid reader, but not an avid writer. She failed ninth grade English because she read novels instead of doing her homework. In high school, she sat alone at lunch and read massive hardback fantasy novels (Tad Williams and Robert Jordan anyone?). It wasn't until the end of her senior year that the other students realized she was reading fiction--not the Bible
Several years ago Bethany's sister dared her to start writing an hour a day until she completed a novel.  Bethany wrote a seven-hundred page fantasy novel that she wisely let no one read--but it taught her how to write.  The fifth novel she write, SHIFTING, is being published by Walker Books September 27, 2011.
Blog: www.suzettesaxton.blogspot.com
web page: www.bethanywiggins.com
Goodreads: http://www.goodreads.com/book/show/10224627-shifting
Amazon: http://www.amazon.com/Shifting-Bethany-Wiggins/dp/0802722806/ref=sr_1_1?s=books&ie=UTF8&qid=1316660383&sr=1-1
Posted by Andrea at 6:37 AM 3 comments:

The other day, one of my author friends was put down very harshly by another writer. It made me pretty upset, and I sat down and wrote out these rules. The list is in no way complete, and some of you may disagree with me on them. If so, that's fine. :-) Regardless of whether you agree or not, there's something to be gained by following them.

Oh, and this post isn't meant to beat around the bush. I've written the rules in a very straightforward manner because there's too much tiptoeing going on in this world.

As you read, please remember that everyone of us, at one point or another, has made many of these mistakes, if not all of them. We're not immune to doing dumb things. :-) Let's correct our errors now, shall we?

1. Don't ever, ever belittle other writers.

It doesn't matter if they've only been writing for one month and we've been writing since we were six. It's wrong for us to elevate ourselves and put other people down, regardless of how many books we've put out.

2. We will always, always find writers who know more about the craft than we do.

3. Don't preach to, offer advice, tell writers what to do, or give feedback unless it's been asked for*. (Or we're presenting. :-))

Basically, unless someone asks for assistance, we shouldn't solicit our opinion. This is one of the habits writers break the most often. We see a problem, we want to fix it. However, if we're honest with ourselves, we'll recognize that many times we do so only because we want to look good.

* Joining online writer's communities such as Wattpad, Authonomy, Gather Writing Essential, is basically asking for suggestions. The point of these groups is to provide a conducive atmosphere for exchanging constructive criticism.

No one likes arrogant authors. Period. End of story.

Elevating ourselves by doing things to make people feel below us is wrong. If we don't know whether we're doing this or not, we need to think what our motivations are before we  speak (or, in our case, type). :-)

I'll never forget the time, before I'd been published, when someone dear to me introduced me to a published author. He wouldn't look at me, didn't acknowledge me, and barely even spoke to his friend - the one doing the introductions. She later apologized. Said the author had just signed a big contract and had been acting differently toward other authors, even friends, since then. Arrogance! Disgusting! :-)

5. Don't down talk our own books, even if we know they have problems.

Who wants to read an author's work (even their good books) if they aren't confident in it? If someone is curious about a book we know doesn't represent our best work, simply tell them the good points and then introduce them to another work of ours.

Can't say this one enough. Our image, especially online, is hugely important! The internet is forever. And forever is a long time to look like an idiot. :-)

7. Regardless of how our books have been published, don't act like it's the only way to go.

8. Don't view self-publishing as a "dirty method to reach readers."

It's not. More and more frequently, publishers are finding their biggest authors from those who've self-published and have already proven that they're good. (Also, if you want to know how the world is changing where eBooks are concerned, read Barry Eisler and Joe Konrath's book, Be the Monkey. It's up on Smashwords for free, and may just completely change how you view the publishing world.)

9. When we write reviews, be professional.

Don't rant about anything off-topic. Don't say things like, "I'm so confused about the book I just read. Would someone go read it and tell me why I was confused?" (Yes, I've seen that before. :-)) Our reviews must maintain dignity, for the author's and reader's benefit. If reading the book brought up a rant, use a different post.

Also, if we hated the book, don't flame the author. I've read so many awful reviews where the author was completely belittled and torn apart. This isn't good! If we hate the book that much, we shouldn't review it. And again, if we're completely honest with ourselves, we'll realize the review is acting only as a way to satisfy our vain ambitions, or elevate ourselves in other peoples' eyes. Attempting to make ourselves look better than the author will only make us look like a jerk to most readers. :-)

There is no such thing as, "If they read your book, there's no way they'll read mine!" Authors build each other up. They help each other find readers. And readers will listen to what other people have to say about a book over what the author has to say. So if we're willing to help other authors, they'll usually be willing to return the favor.

11. Don't take offense when someone doesn't fall in love with our writing.

This reminds me of something a Relief Society president (LDS religious leader) once told the women in our young single adult group: "Don't be offended when a guy doesn't fall for you. There are others who will - just shrug it off and move on." She was right, and it applies to writing as well. Not everyone will like what you've written. Get over it. There are plenty who will. :-)

And that's it for now. Anything you'd like me to add? Leave a comment and I'll put it in.
Posted by Andrea at 11:38 AM 2 comments: