My Book Is Finally Being Released!

My book, The Key of Kilenya, is FINALLY being released! Hallelujah! No more waiting, folks. :-) It'll be available for ereaders of every kind (Kindle, smashwords, etc.) on June 28, 2011, and in print six weeks later. I'm so excited I can hardly contain myself. It's actually happening this time! We're still working on the cover - let me know what you think of it so far: 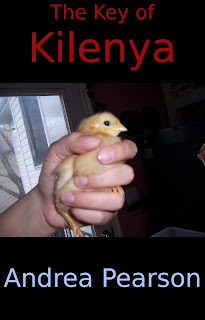 I really like how happy the chick looks.
What do you think? Is a baby chicken too far offbase for a stolen, magical key that is somehow linked to a 14-yr-old boy from Earth? Does it make you want to read it? :-)

Ha ha. Kidding. (What on earth is with me and chickens lately? Goodness! I posted a bunch of pictures on Facebook, too. See for yourself.)

Okay, so I'll post the actual  cover when they've finished putting it together. And it'll be much better looking than this. The chicken will be fully grown. ;-)

I'm trying to find a few more people to read through the last version before sending it off. If you'd like to be a beta reader, let me know within the week (email: apATandreapearsonbooksDOTcom), and I'll shoot it off to you in an email. (I separated the book into four parts to make it easier to get through - five chapters at a time.)

Oh, and in other news, my brother and his wife had a baby this morning! Their second - a beautiful little girl with lots of dark hair. :-)