A bunch of things to talk about today! Eeek. :-)

First, we're putting together an anthology of books one and two for the Kilenya Series. Mainly so people can buy both books for slightly cheaper, and also so I can have a place to put my editing gagreel for the first book. Some of the typos I made (innocently - I was sooo new to writing) still give me the giggles, and I've been wanting to share them with my readers. :-)

Second, we've made some changes to The Key of Kilenya (not to the story - no worries there), and those will be included in the Anthology. A few of my more devout readers will enjoying finding the changes. :-)

Third, the special edition for The Key of Kilenya (illustrations) will be ready soon. Maybe in a month or so - keep your eyes open, because I'll be spreading the word like crazy!

Fourth, as I'd mentioned a while ago, James Curwen and his merchandising company are putting together miniatures for my series. I'm really excited about this. :-) He's been working on the actual key of Kilenya, and he wants me to start getting an idea for how many people would want one. They'll be fairly inexpensive - around $5 each. If you want me to put you on the list, send me an email!

Fifth, August Fortress, Kilenya Series Book Three will be available soon! By soon, I mean within a few weeks. It's hard to know the exact date, but like the KofK special edition, I'll be announcing it like crazy! I'm sooooo excited! This book was a lot of fun to write. Readers: use the anthology to catch up on the series so you're completely fresh when August Fortress comes out!

And sixth- the cover for the anthology! Let me know what you think of it. :-) 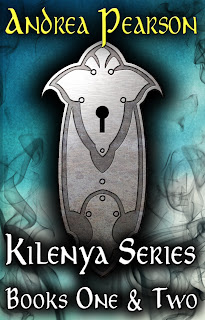 I think I'm in love with it, just a little bit. :-) See if you can pick out the themes that are carried over from the covers for The Key of Kilenya and The Ember Gods. :-)

Oh, don't forget to let me know if you want to be added to the list of people who want a key! (I'll post pictures once James sends me a working prototype.)
Posted by Andrea at 2:27 PM 5 comments: