The Dream Keeper by Mikey Brooks

When an evil shifter takes over the gateway to the realm of Dreams, it falls to 14-year-olds Parker and Kaelyn to stop him. Their only hope lies with Gladamyr, the Dream Keeper, but can they trust a Nightmare to save their world? 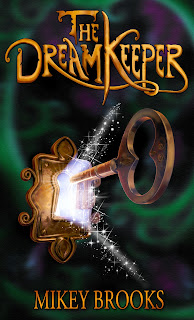 Synopsis:
Loser—the most frightening word to ever be uttered in junior high school. Even the coolest kids are afraid of being associated with it. 14-year-old Parker Bennett is no exception. He can’t even be himself around his friends for fear they might not accept who he really is. When circumstances force him to team up with Kaelyn Clarke, the biggest loser in the ninth grade, Parker has to decide what is more important; protecting his social status or saving the world. Nightmare named Fyren has taken over the gateway to the realm of Dreams, with the intention of controlling mortals, and it falls on Parker, Kaelyn, and Gladamyr – the Dream Keeper – to stop him. They learn being called a loser is no longer a fear, when compared to the terror of real nightmares.

In Praise of THE DREAM KEEPER:
“This really is a cracking novel. Action-packed and spellbinding!”—Cas Peace, author of The Artisans of Albia series.

And here's an excerpt from the book!

Parker was about to assassinate the general of the goblin army. It wasn’t murder, it was an assignment. He tried to justify what he was about to do as he jumped from the rooftop and landed just above the battlement wall. It was the perfect spot to scout the camp. The goblins filling the keep were everywhere, sharpening blades and axes or gathering weapons for the impending battle. Parker noticed a large troll in the right hand corner of the space below, hammering solidly on a sword large enough to split three men into six. He spotted his target.

The general of the goblin army was a large brute with golden braids hanging down his chest. He was the one who had ordered the burning of Parker’s home village. The one who had ordered the death of Parker’s family and friends. This monster, this villain, was the reason Parker had set out on his journey to seek vengeance upon the unjust. This was the creature responsible for Parker swearing allegiance to the Mightercore army, who quickly gave him the role of assassin-scout.

Parker maneuvered his way down the wall, careful not to move too fast or his invisibility cloak would lose its power. He placed his foot in one crevice, then his hand in another. After a few moments of skilled climbing, Parker found himself precariously positioned just behind the golden haired brute, leaving only a small distance between him and his foe. In a quick session tactic, Parker could ignite his blade with the magic of the Mightercore and his target would be no more. He positioned himself to strike, raising his sword and whispering the incantation that would release the blade’s power—.

He ignored whoever was calling his name; they did not matter. All he saw was the villain before him. The completed spell ignited Parker’s sword with a blazing haze of blue fire, and he had to act fast.

The loud call startled him and he swung too late. The goblin general had already turned and he struck, forcing Parker back against the rocky battlements. Parker parried the attack and thrust forward with a low slash. The general sidestepped and lunged forward again. Parker parried and rolled away from the wall. A lightning spell was the only magic he had left. If he could find enough time to call out the incantation, he could have the general radiating electrons from every appendage.

He rolled until he was a good ten feet from his opponent, then quickly stood. Lifting his hand into the air, he called down the lightning. The sky filled with a brilliant white light, and the crack of thunder reverberated off the walls. Parker briefly closed his eyes then opened them, praying he had hit his target. As the white dust began to clear, he made out an image before him. He peered at it, his heart thumping.

“Parker, I’ve called you three times. Now get off that machine and go do your homework.”
Posted by Andrea at 12:00 AM